The Center for International Strategic Analyses (KEDISA) held with great success an event titled “The Geopolitical Chessboard of Energy and the role of Greece” on December 16th, 2019. The event took place at the Amalia Athens Hotel. The media sponsors of the event were the websites energia.gr and energypress.gr.

The coordinator of the event was journalist Mrs. Iro Rantou. The speakers of the event were: Mr. Kostis Stambolis (Chairman and Executive Director of IENE), Mr. Nikolaos Farantouris (Professor of the Jean Monnet European Centre of Excellence of the University of Piraeus) και η Dr. Marika Karagianni (Expert on European and International Energy Issues at the Department of Political Science and Governance of the University of Peloponnese).

The event was graced with the presence of many people such as retired generals and admirals, ambassadors, members of the Greek diplomatic corps, the Armed Forces and the Security Corps, businessmen, journalists and students.  A great honour for KEDISA was the paricipation in the event of  Lt. General ret. and member of the Board of Directors of HELISS Mr. Ioannis Baltzois, Lt. General ret. and Director of Studies of HELISS Mr. Ippokratis Daskalakis, President of the Greek branch of Republicans Abroad Mrs. Aikaterini Papathanasiou, Counselor of the Bulgarian Embassy in Athens Mr. Georgi Shopov and Director of the Czech Centre in Athens Mrs. Lucie Kuligova.

In his introductory speech, the Founder and President of KEDISA Mr. Andreas G. Banoutsos referred to the geopolitical energy competition between the USA and Russia, focusing on Europe. He said that the US and the EU want to reduce Europe’s dependence on Russian gas and stressed that the policy of diversifying the gas sources and routes is right. However, he pointed out that, taking the current data into account, the alternative sources of natural gas supply are not sufficient to cover the overall energy needs of Europe and that due to  the sufficient quantities and its competitive prices, the Russian gas will de facto remain the most important source of natural gas supply of Europe for the foreseeable future. In particular, in the case of Greece, he pointed out that the main supplier of our country is the Russian Gazprom, which covers approximately 60% of the needs of the Greek market in natural gas. This percentage is high and he mentioned that it is desirable and feasible to reduce the dependence on Russian gas to a level of approximately 40%, but he highlighted that further reduction could cause problems to the smooth supply of the Greek market since Gazprom will still remain the main supplier. He added that this rate of 20% of the reduction could be covered by imports of US shale gas in liquefied form (LNG Shale gas) or by the future exploitation of natural gas deposits in the Eastern Mediterranean. He also spoke about the need to advance energy projects that will enhance the objective of diversification of energy sources: the upgrade of the LNG terminal in Revithoussa, the construction of a floating terminal of storage regasification (FSRU) in Alexandroupolis, the completion of the construction of the interconnector Greece-Bulgaria (IGB) and the Transadriatic TAP pipeline, which will carry Azeri natural gas to European markets as well as the diversification of the routes (construction of the ITGI-Poseidon, which will carry Russian natural gas to Italy via Greece). During his speech, he questioned if the cancellation of the planned South Stream pipeline under the responsibility of the European Commission (which would carry Russian gas through Bulgaria and Greece to Italy) was ultimately to the detriment of the Greek interests, as Russia turned to Turkey to build the Turkish Stream, which again will transport Russian natural gas to European markets, only this time Turkey is upgraded to an energy hub. Concluding his speech, he pointed out that Greece should support the completion of all of the above energy projects without making exclusions and geopolitical considerations and solely on the basis of the service of her economic interests.

Mr. Kostis Stambolis, Chairman & Executive Director of the Institute of Energy for South-East Europe (IENE) indicated in his truly interesting report that natural gas will play a key role in the years of the so-called energy transition (meaning gradual reduction in the use of hydrocarbons and increase of the use of renewable sources of energy). In this context, natural gas claims prominence because of its lower greenhouse gas emissions, its large reserves and the significant infrastructure in built-up pipelines. He also strongly criticized the “incomprehensible political” decision of the European Investment Bank to “freeze” any financing of gas-related projects starting from 2021. Continuing his speech, he said that despite the energy transition, the use of hydrocarbons as the “load base” is absolutely essential to meet the energy needs of the world’s population, which is increasing dramatically. It was also reported that the LNG will gain a larger share of the gas market in the coming years (compared to gas transported by pipelines) and noted that at present Greece has only one LNG terminal (in Revithoussa) while Turkey already has four. Then, referring to the provocative behavior of Turkey, he underlined that one of the reasons explaining this behavior is the her enormous energy needs and its stress to cover them by also gaining share in the energy wealth of the Eastern Mediterranean and the Aegean Sea. In conclusion, he said that if Greece acted intelligently it would benefit in the near future from the exploitation of the deposits of natural gas and oil expected to be found both in the Ionian Sea and the south of Crete.

Mr. Nikolaos Farantouris, Professor of the European Jean Monnet Centre of Excellence of the University of Piraeus, started by saying that the EU’s institutional framework for Energy was incomplete until 2009 when the Treaty of Lisbon entered into force. After 2009, the EU, thanks to the provisions of the treaty of Lisbon on energy issues, has gained the legal tools enabling it to define the rules of the game, while the groundwork for building energy cooperation was also laid. In other words, we have moved from the total absence of the EU in the energy field to the level at which the Union has a role and a say in energy matters. Professor Farantouris also stated that the discoveries of energy deposits in the Eastern Mediterranean means that for the first time, the EU may exploit energy resources in its territory, since, up to today, it covers the greatest part of its energy needs with imports from third countries (Russia, Algeria, Norway).

Dr. Marika Karagianni, an Expert on European & International Energy issues, stressed that the energy fields in the Eastern Mediterranean are mostly deep into the sea, resulting in their research and extraction requiring expensive and long-term investments with high investment risk and political commitment for the countries of the region. She also mentioned that, according to BP’s Energy World Outlook for 2018, the currently certified natural gas fields in the Eastern Mediterranean do not exceed 2.5-3% of global reserves and added that, despite the progress made in hydrocarbon exploration and extraction in the Eastern Mediterranean, overall the region cannot yet be described as a reliable and realistic source of gas supply for the EU. Concluding her speech, she said that the confirmed reserves of natural gas that have so far been discovered in Cyprus are not sufficient to ensure one or more routes to Europe (Pipeline East Med or LNG terminals) and therefore the European interest so far remains subdued and this is also one of the reasons why the EU’s response to the drilling program of Turkey is relaxed.

The speeches were followed by a very intense and interesting discussion between the speakers and the audience of the event. 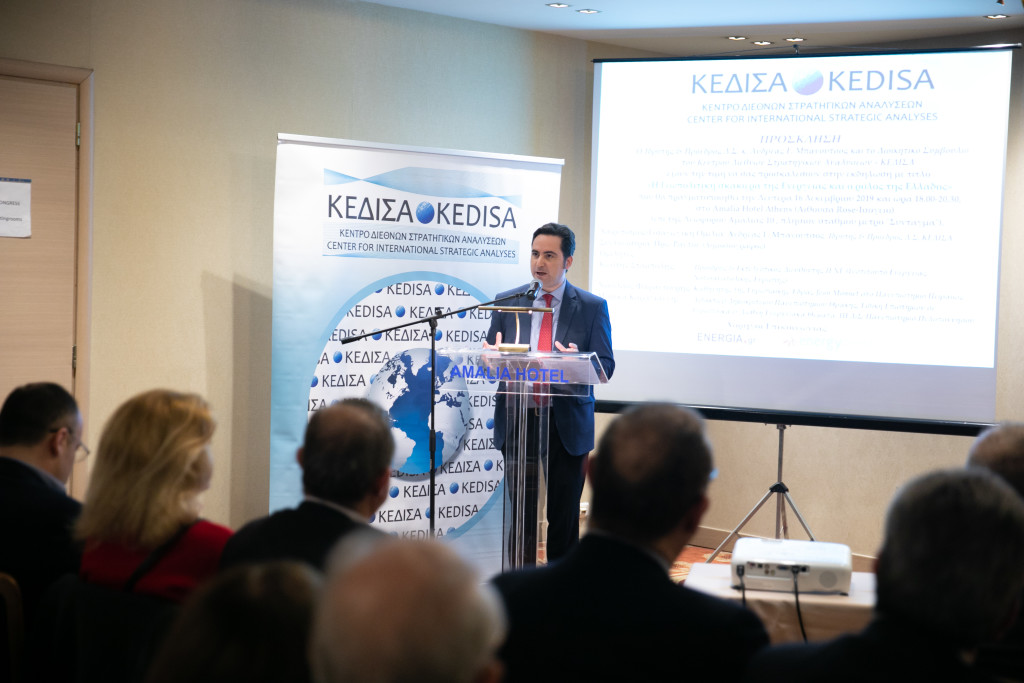 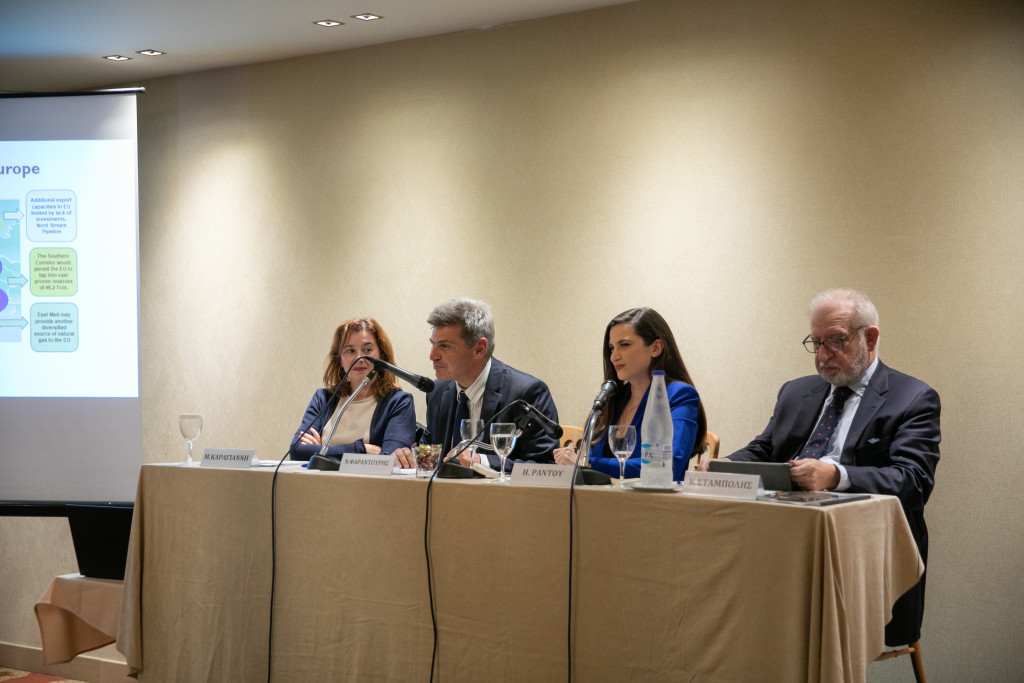 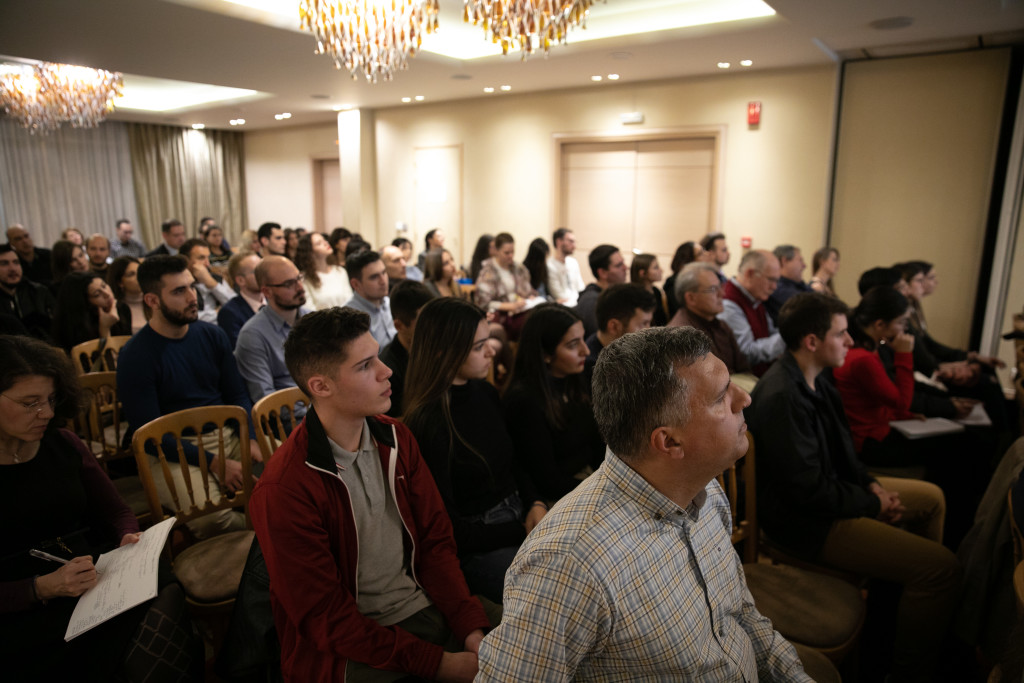 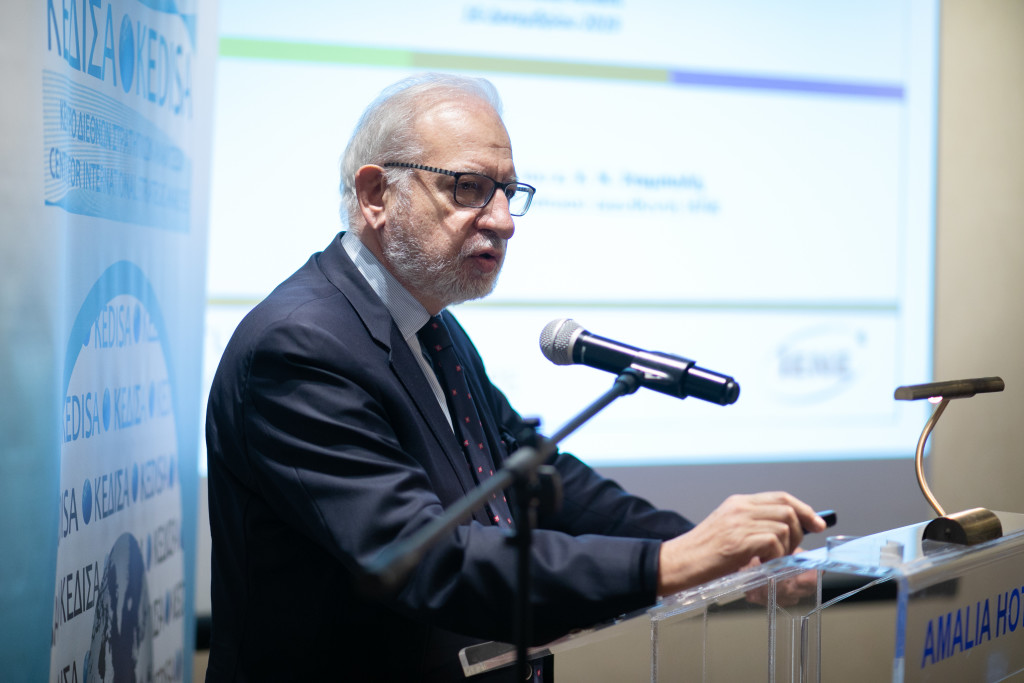 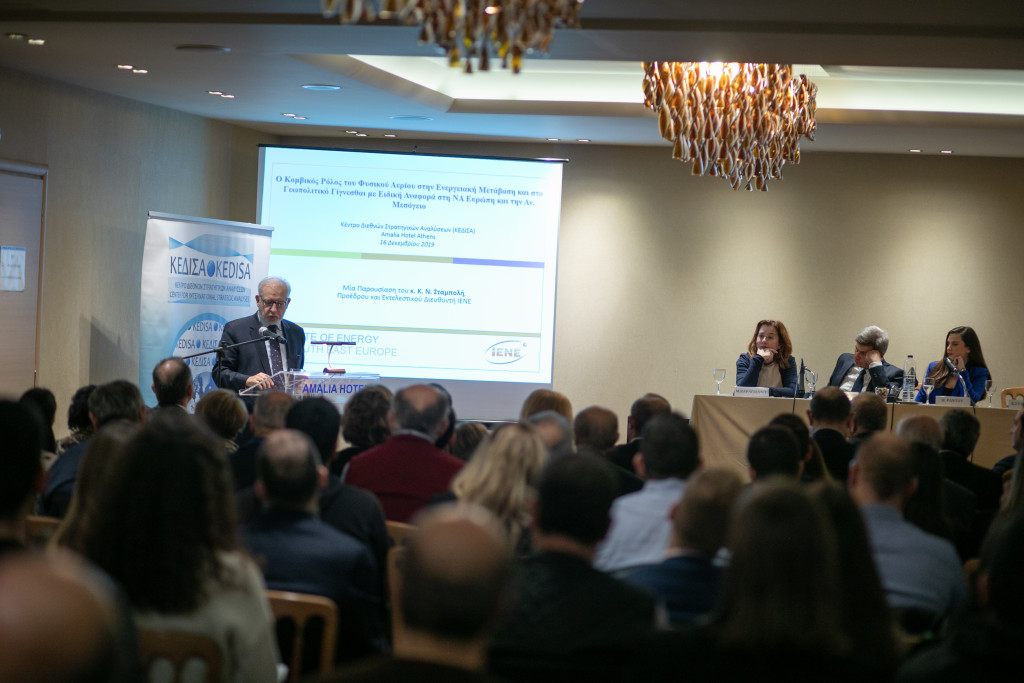 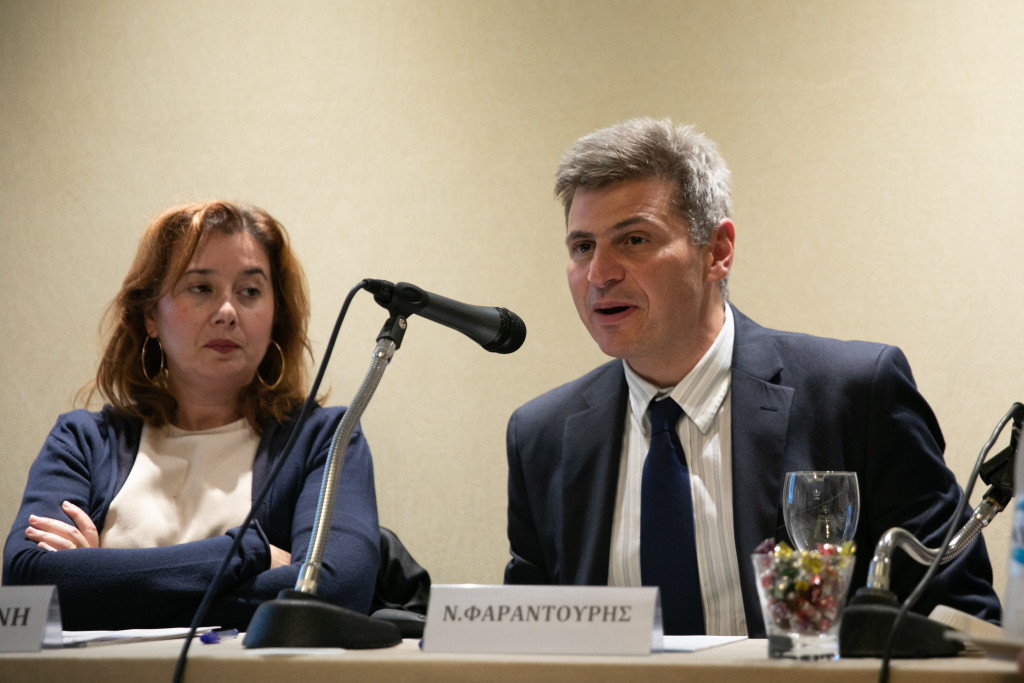 Mr. Nikolaos Farantouris, Professor of the University of Piraeus. 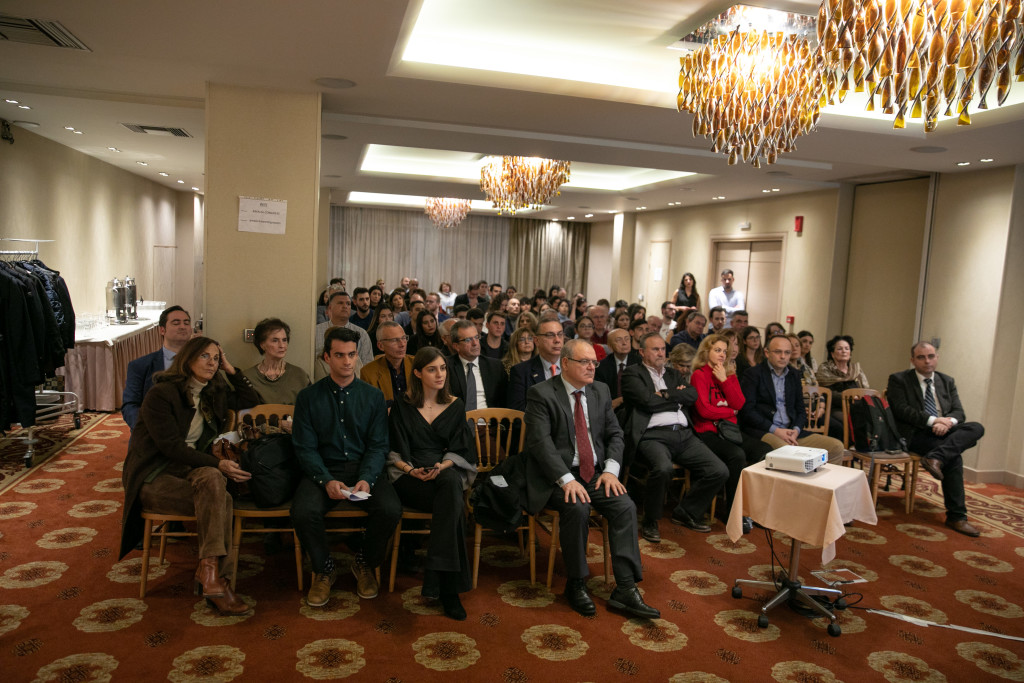 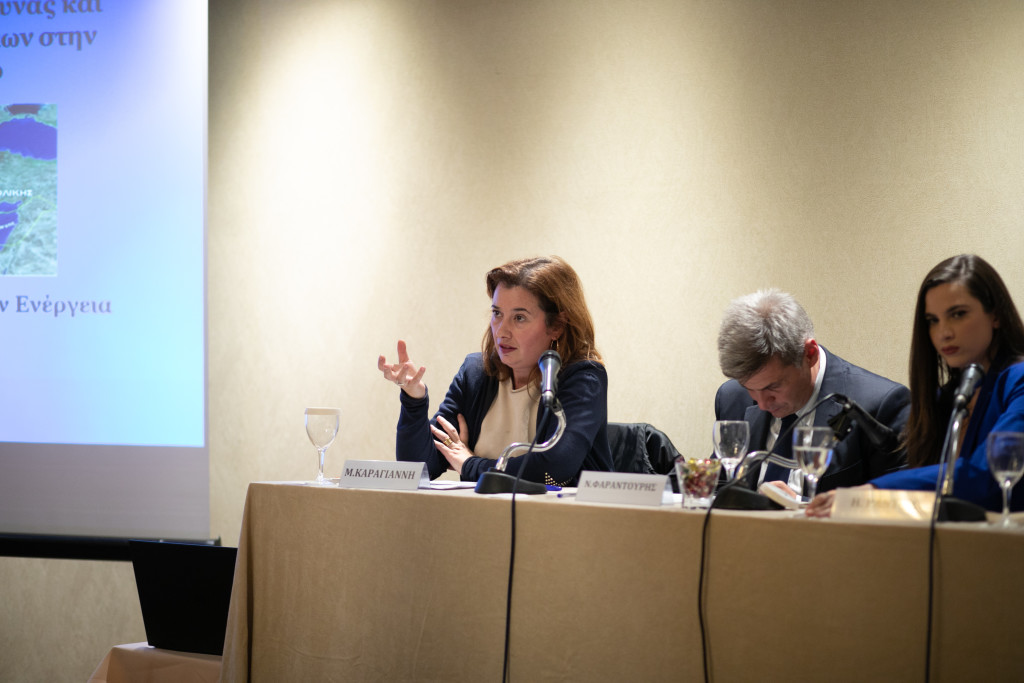 Dr. Marika Karagiannis, Specialist in European and International Energy issues at the University of Peloponnese (left). 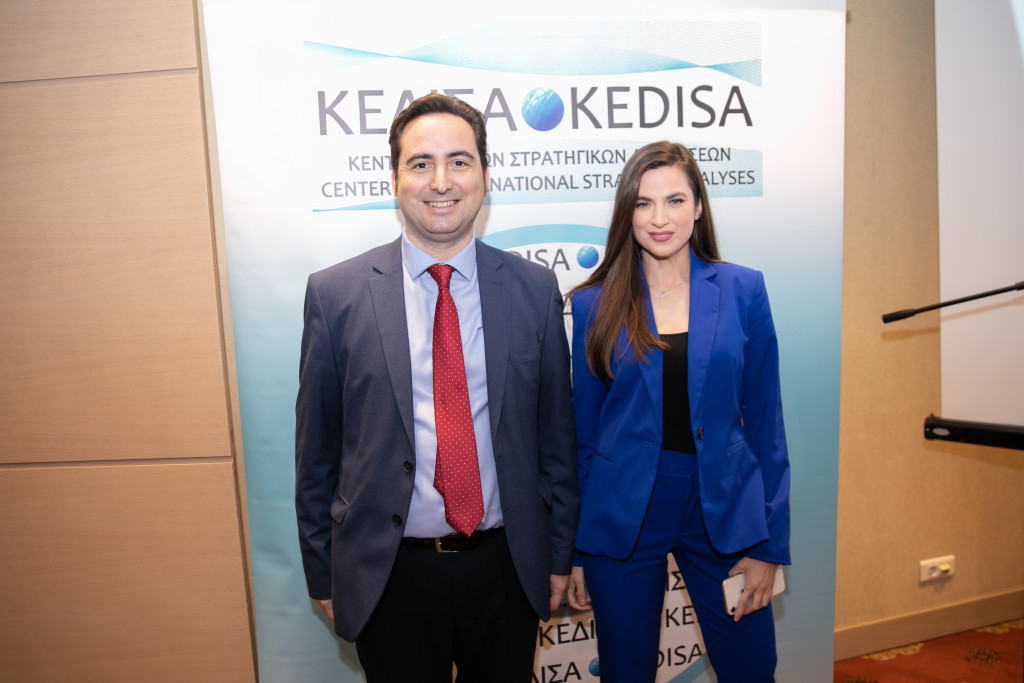 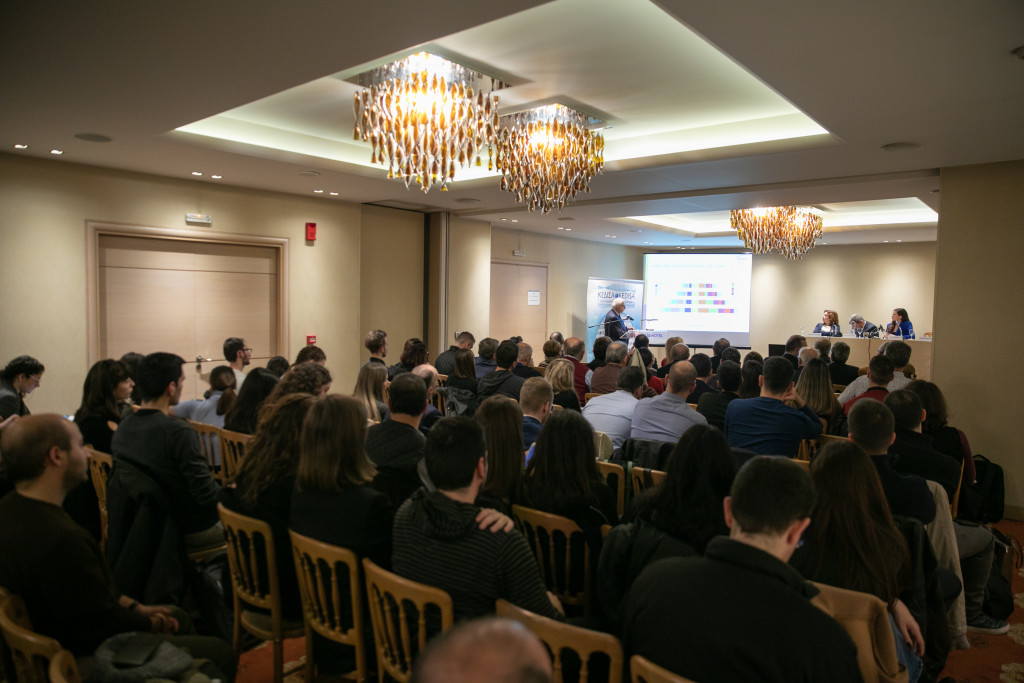 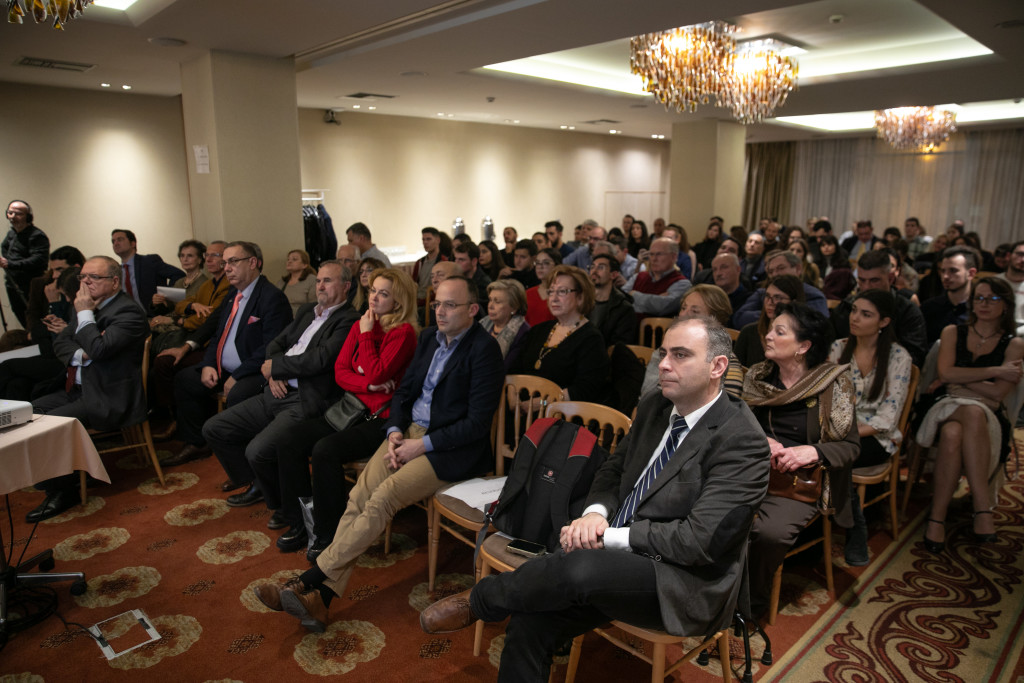 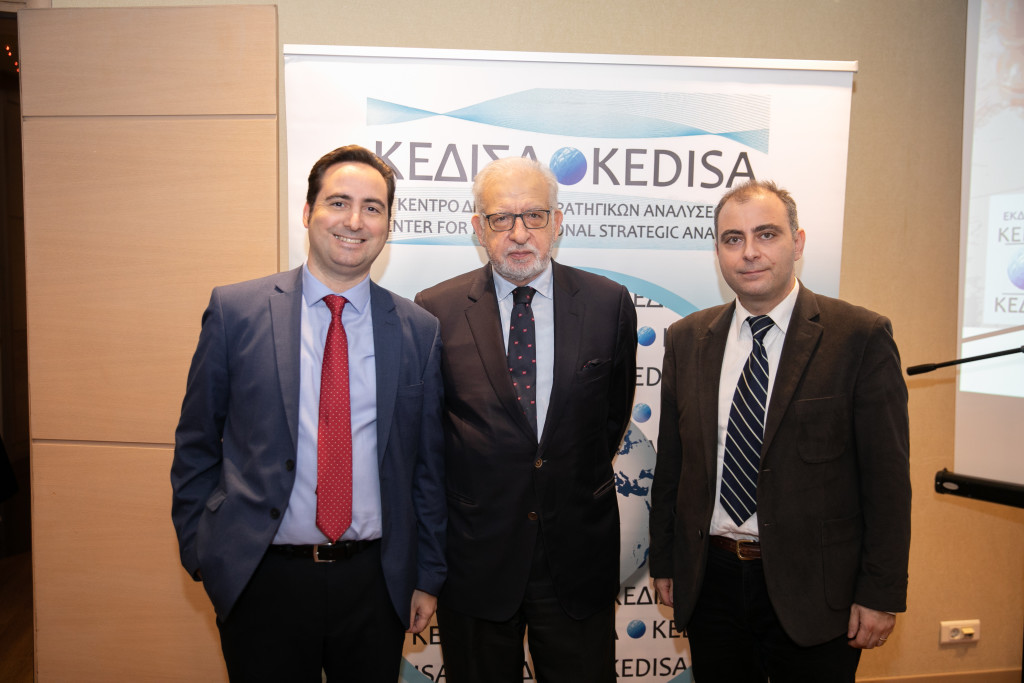 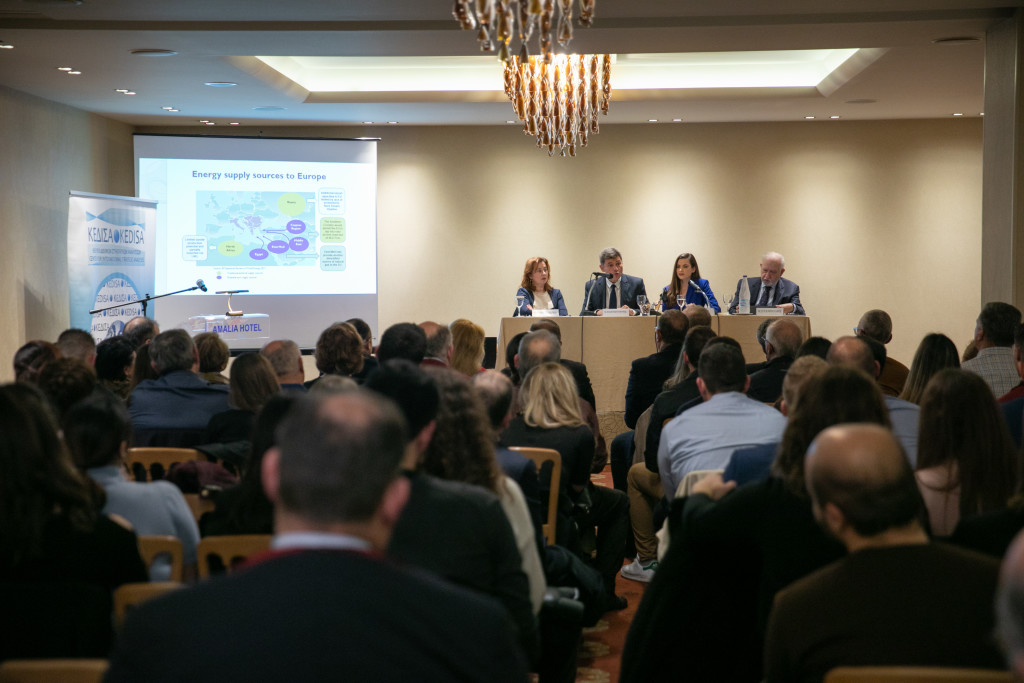 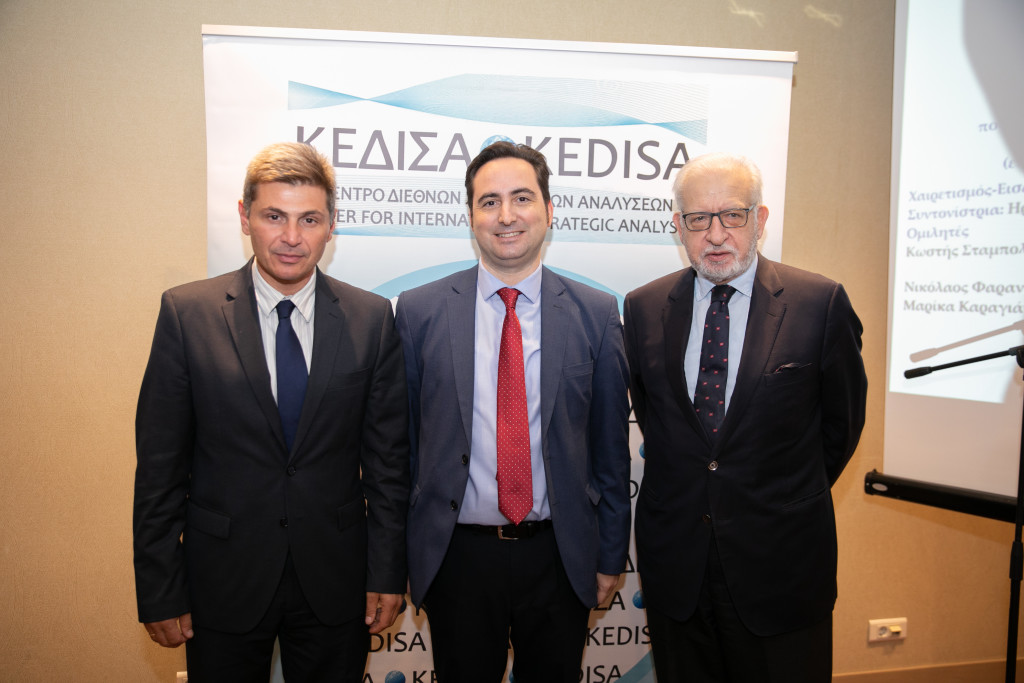 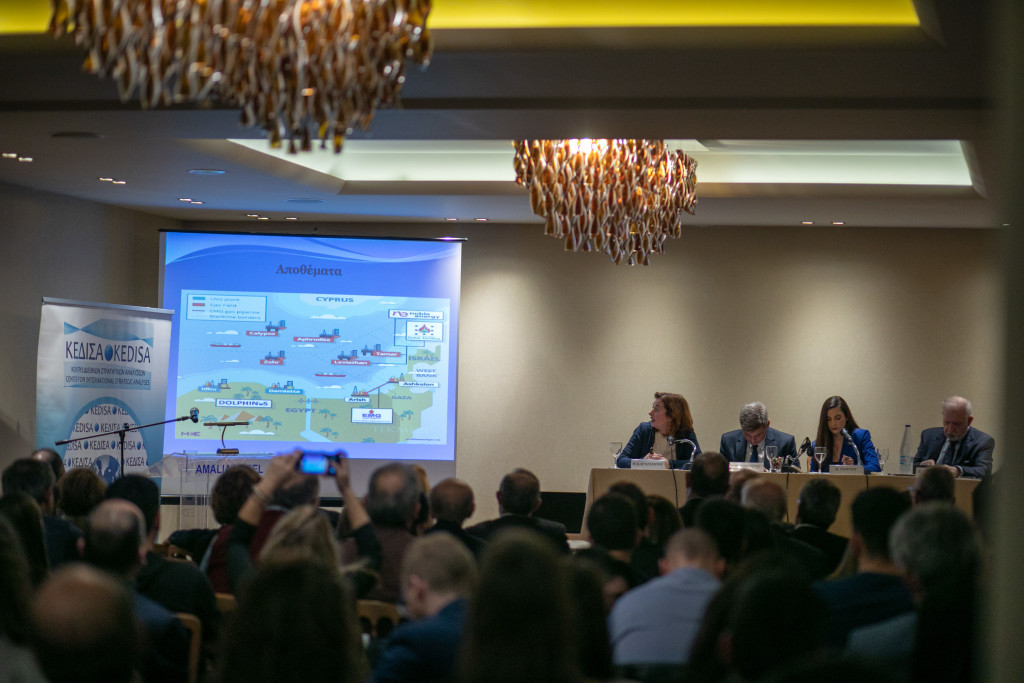 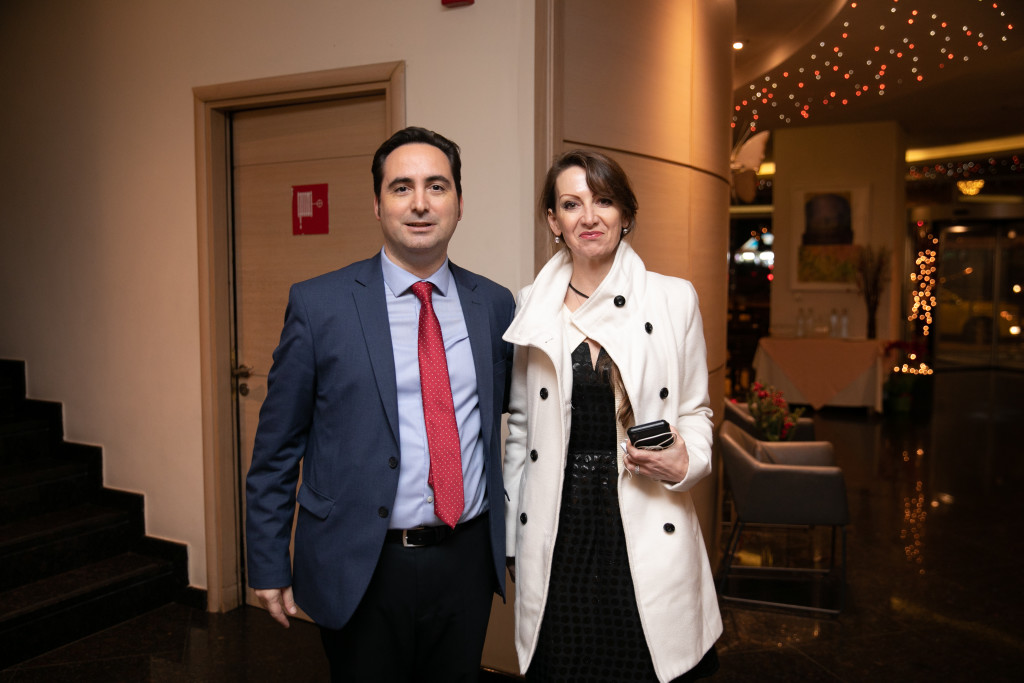 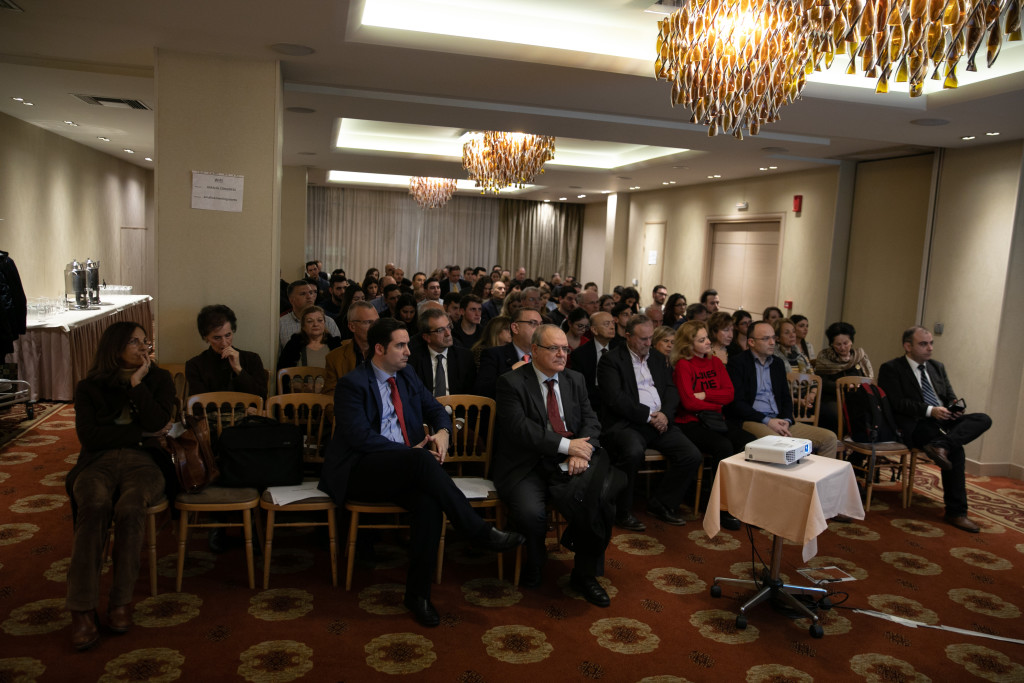 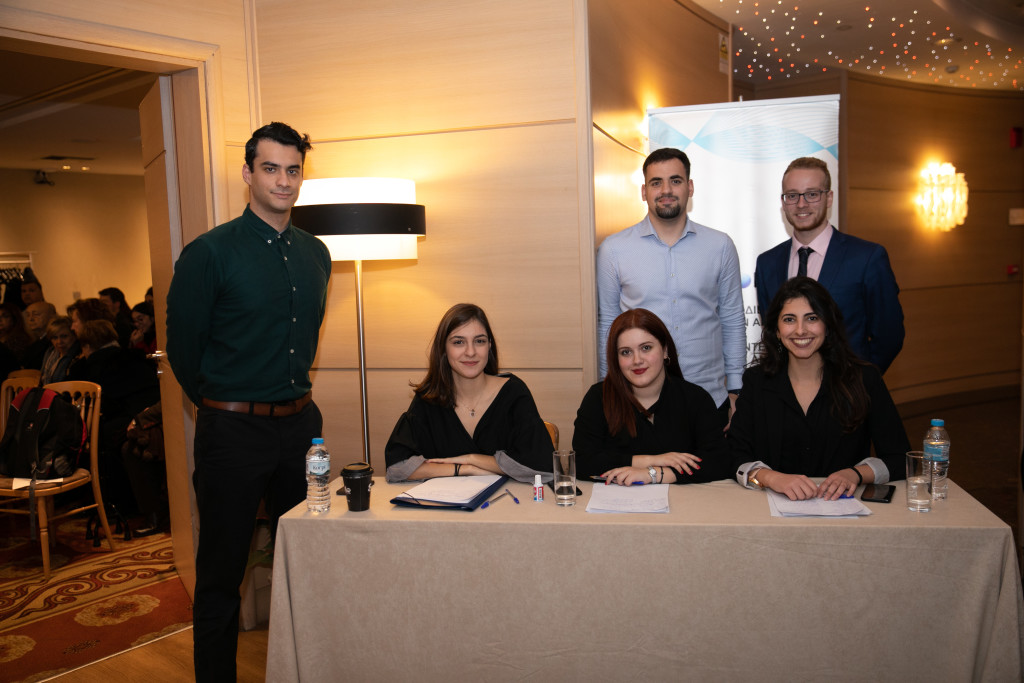