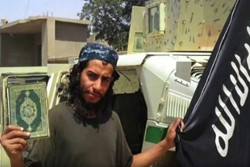 Wanted terrorists carrying European passports can be waved through border checks with nothing more than a cursory visual inspection of their travel documents, sources have said.

And EU officials say they have no idea if any of the thousands of refugees currently making their way into Europe are being scanned against the watchlist.

On average, just 10-20 per cent of EU nationals travelling from outside the continent have their passports checked against a Schengen-wide database designed to catch foreign fighters returning from Syria and Iraq.

At least three of the eight known Paris terrorists are believed to have fought in Syria before returning to commit Friday’s atrocity. All those identified so far are believed to be EU citizens.

Abdelhamid Abaaoud, the suspected mastermind, boasted of how he had travelled back and forth from Syria to his Belgian home several times as he plotted mass-murder. He told an Isil magazine that a border guard failed to recognise him despite being hunted by intelligence agencies and his photograph being broadcast in the news.

Samy Amimour, the Bataclan suicide bomber, was put on the watchlist after trying to travel to Yemen in 2012. But he was still able to travel to Syria a year later, triggering an international warrant for his arrest, before sneaking back to France to commit mass murder.

Ayoub el-Khazzani, the terrorist behind the botched gun attack on a Thalys high speed train this summer, was also on the SIS list but is believed to have travelled to Syria and criss-crossed Europe with impunity.

It comes as European leaders warn that theSchengen free-travel zone is in crisisand will collapse as states throw up old border controls in the face of terrorism and a migration crisis.

The Schengen Information System (SIS) watchlist contains the details of 4,000 foreign fighters, as well as hundreds of thousands of stolen passports, suspect cars, wanted criminals and missing people. Passports of people travelling from outside the continent are scanned against a computer database flag up those who need to be stopped before they can enter the free-travel zone on the continent.

But the Telegraph has learnt that there are gaping holes in SIS, thanks to an EU commitment to free movement, that have let wanted men slip through.

• Who were the Paris terrorists? Everything we know about the Isil attackers so far

It is ultimately up to countries’ security services how they use SIS for EU passport holders. But EU guidelines say that Europeans should be subject only to a “minimum check”, including a “rapid and straightforward” inspection to check that their passport belongs to them and is not a forgery. For example, at the Eurostar border, this often involves little more than a momentary downwards glance by French officials.

Officials said the proportion of European passports cross-referenced against SIS ranges between countries from one per cent to one hundred per cent. The average across the EU is around 10-20 per cent.

“Abaaoud, or another jihadist, has good odds working in their favour,” an EU diplomat admitted.

By contrast, British border officials are understood to check every traveller, regardless of nationality, against SIS and other immigration and criminal databases.

In the wake of the Charlie Hebdo massacre France demanded every traveller into Europe be subject to full SIS checks, backed up by fingerprint scans. The demand was repeated after the Paris massacre. But EU officials are resistant to a fundamental review of the rules because the right to pass in and out the continent unhindered “is a part of free movement”, they argue.

Under EU rules, all non-European passport holders are meant to be checked against SIS. However, this is not taking place. Only the “majority” of airports taking commercial flights from outside Europe are applying the SIS checks.

European officials in charge of the system admit they have no idea how many – if any – of the thousands of refugees flooding into Greece and Hungary are scanned against SIS. There is little chance of someone who crosses into Europe over a rural border being scanned, they admit.

“We are clear what the rules say and what states should be doing .They are not always applied in the way we would have wanted,” said an official.

Refugees are meant to be logged in EURODAC, a fingerprint database used for processing asylum claims, which police can access. However, fewer than one in ten migrants in some areas of Greece are thought to have been registered this summer, although that rate has since improved.

Even then, EURODAC cannot “talk” to SIS, meaning that even if a suspected jihadists did register themselves as refugees on the Greek islands, the system would not flag them up as a threat.

At least one of the gunmen disguised themselves as a refugee and was registered on the Greek island of Leros on October 3.

In a further weakness, SIS does not allow for a suspect traveller’s fingerprints to be searched against a biometric database. That gives an advantage to those travelling with fake passports.

The European Commission conducts a regular evaluation of SIS, but its findings are classified “restricted” and kept from public view. Greece and Italy, which have seen hundreds of thousands of illegal crossings this year, will not be audited until next year.