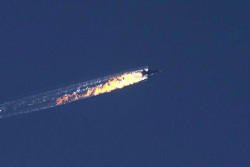 MOSCOW, November 24. /TASS/. A Sukhoi Su-24 attack aircraft of Russia’s air group in Syria has crashed in Syrian territory, presumably, as a result of an attack from the ground, the Russian Defense Ministry has said.

Kremlin says the incident with crashed Russian plane too serious to rush with conclusions
Earlier, some media claimed the plane that crashed in Syria had allegedly violated Turkish airspace and was shot down by Turkish Air Force planes.

Russian airstrikes against the Islamic State terrorist group in Syria started on September 30. Russia intensified its airstrikes against the terrorists after it was reported that the crash of the Russian A321 plane in Egypt was caused by a terrorist bomb exploding on board. Russia has involved long-range aviation in its air strikes and has enforced the air grouping deployed in Syria. Russia’s air grouping involves 69 aircraft, including Su-34 bombers, Su-24M and Su-25 attack aircraft, Su-30SM and Su-27SM3 fighters and Mi-8 and Mi-24 helicopters.