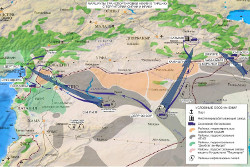 The Russian Defense Ministry has released evidence which it says unmasks vast illegal oil trade by Islamic State and points to Turkey as the main destination for the smuggled petrol, implicating its leadership in aiding the terrorists.

The Russian Defense Ministry held a major briefing on new findings concerning IS funding in Moscow on Wednesday.

“Today, we are presenting only some of the facts that confirm that a whole team of bandits and Turkish elites stealing oil from their neighbors is operating in the region,” Antonov said, adding that this oil “in large quantities” enters the territory of Turkey via “live oil pipelines,” consisting of thousands of oil trucks.

Antonov added that Turkey is the main buyer of smuggled oil coming from Iraq and Syria.

“According to our data, the top political leadership of the country – President Erdogan and his family – is involved in this criminal business.”

However, since the start of Russia’s anti-terrorist operation in Syria on September 30, the income of Islamic State (IS, formerly ISIS) militants from illegal oil smuggling has been significantly reduced, the ministry said.

“The income of this terrorist organization was about $3 million per day. After two months of Russian airstrikes their income was about $1.5 million a day,” Lieutenant-General Sergey Rudskoy said.

At the briefing the ministry presented photos of oil trucks, videos of airstrikes on IS oil storage facilities and maps detailing the movement of smuggled oil. More evidence is to be published on the ministry’s website in the coming says, Rudskoy said.

The US-led coalition is not bombing IS oil trucks, Rudskoy said.

mod_russia: #turkish president #erdogan would not resign if his face was smeared with stolen #syria oil

“These [airstrikes] helped reduce the trade of the oil illegally extracted on the Syrian territory by almost 50 percent.”

Up to 2,000 fighters, 120 tons of ammunition and 250 vehicles have been delivered to Islamic State and Al-Nusra militants from Turkish territory, chief of National Centre for State Defense Control Lt.Gen. Mikhail Mizintsev said.

“According to reliable intelligence reports, the Turkish side has been taking such actions for a long time and on a regular basis. And most importantly, it is not planning to stop them.”

Responding to the Russian allegations, Turkish President Recep Tayyip Erdogan has said that nobody had a right to “slander” Turkey by accusing it of buying oil from Islamic State.

Speaking at a university in the Qatari capital, Doha, on Wednesday, Erdogan once again claimed that he would resign if such accusations were proven to be true and stressed that he did not want Turkey’s relations with Russia to deteriorate further.

Following Russian accusations, the US has again defended Turkey, denying any ties between Ankara and Islamic State.

“We flatly reject any notion that the Turks are somehow working with ISIL. Preposterous. And really very, kind of ridiculous,” Steve Warren, Pentagon spokesman, said.
He called Turkey “a great partner” to Washington in fighting against IS terrorists in Syrian and Iraq.

Iraq will immediately file a protest in the UN Security Council if claims that Turkey is illegally purchasing oil from Islamic State terrorists are confirmed, the Iraqi Defense Ministry said.

“If the Iraqi government receives enough evidence and details, without any hesitation it will file a protest at the UN Security Council and all other relevant international bodies,” Naseer Nuri, ministry’s spokesman, told Sputnik.

According to Nuri, certain “general information about the smuggling of Iraqi oil by trucks to certain countries, including Turkey” is already available.