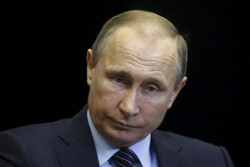 A ceasefire in Syria will come into effect on February 27, Russia’s President, Vladimir Putin, said in a special address, in which he also expressed hope that all of the warring parties will support the action plan agreed upon by Moscow and Washington.
The statement was first published on the Kremlin’s official website on Monday. This is the full text:

I just had a telephone conversation with President of the United States of America Barack Obama. The phone call was initiated by the Russian side, but the interest was certainly mutual.

During our conversation, we approved joint statements of Russia and the US, as co-chairs of the ISSG, on the cessation of hostilities in Syria. Adoption of the statement was preceded by intensive work by Russian and American experts. We also made use of the positive experience we accumulated over the course of cooperation in eliminating chemical weapons in Syria.